The Surgery in Spain

I arrived on .   The trip took around 9 hours, and I arrived safely after having taking high doses of Boswellia, as per the recommendation that Michelle Gerencser gave me.   The trip itself had no issues at all! (thanks to you, Michelle)

I met the the Neurosurgery in Europe – Dr. Bartolomé Oliver, PhD.   He is the heads the Neurosurgical Department at Centro Médico Teknon.  He is leading 9 Neurosurgeries in the hospital and he takes selected complex patients (and I was one of them).   He was trained in Sweden, Switzerland, Canada, and the USA.  He has 45 years of experience.

He explained in details what to expect during the surgery and what will happen post surgery.  He also had me do another Functional MRI and blood work (few tests) on the same day.

The blood tests had some new readings outside of the readings, and I could not know the reason this took place (the tests are Complete blood count, VSG, Platelets, Blood glucose, Total bilirubin, Creatinine, Urea, GOT and GPT, Alkaline phosphatases, and Electrolyte Panel).  You can  download the blood tests here.   (I wonder if these readings showed up differently because of what I did few weeks before traveling as I was on Ketogenic Diet, and I took 12 HBOT sessions)

The Functional MRI took place in another hospital because he said that the best ones are there.  Once I arrived there, I found that Dr. Bartolome was there too.  Dr. Pujol and Dr. Deus worked on my case for the fMRI .  One of the doctors has 28 years experience, and he said he was the first doctor who worked on fMRIs in all of Europe.  He explained to me the outcome explaining that one part that has the largest tumor area is safe to cut off, but the area that is related to words and memory is not safe to be cut.   Below are the key images from the fMRI 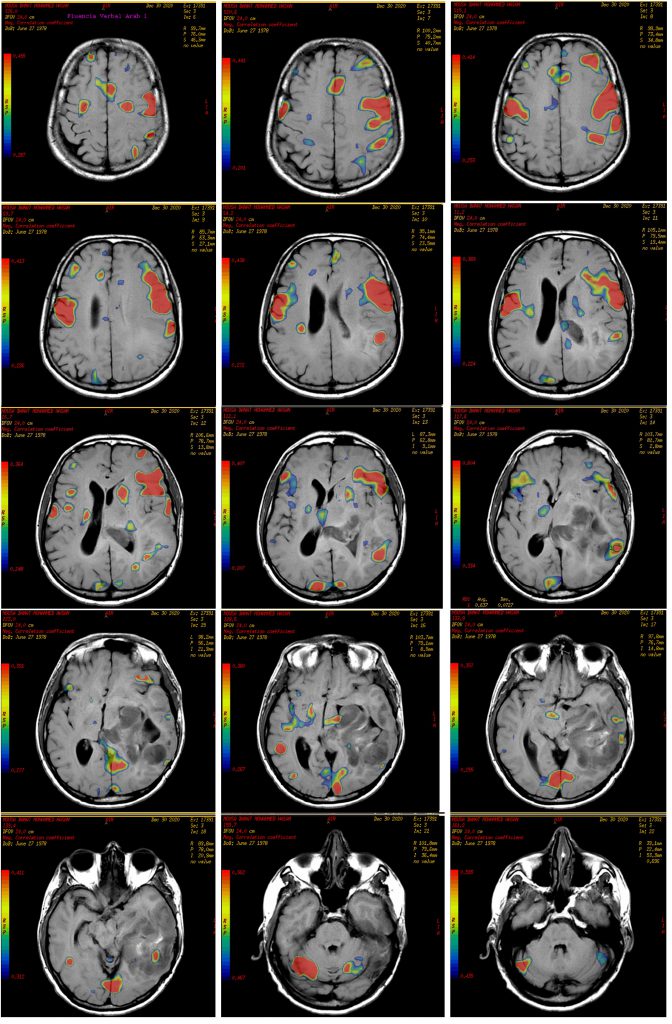 Dr. Bartolomé stated again that 70% of the brain tumor area will be removed while the other is most likely won’t be touched.

It is important to know that I have communicated to three fine Neurosurgeries in the United States, and one in Amman, Jordan  and all of them looked at the MRIs and they all said that only 70% of the surgery is possible (and that the surgery is recommended and must take place immediately).   They all said that the new tumor is going to be either Stage 3, Stage 4 or a combination of both.

One of the doctor took around an hour of assessments (questions, games, photos-to-names, …etc).   She stated that there are areas above average, and others below average.   The ones I was challenged with were finding words for selected photos, and remembering the photos if I am asked after few minutes.

The plan is that parts of these tests will be done again just before surgery and during the surgery when I am awake to compare my situation to what will be resected during this surgery.

I had asked them to take videos and photos, and they were kind enough and they shared that.

I was at the hospital at 9 AM and was bored a few hours.

First, I did an X-Ray, and that showed that everything is alright.  Then around 3:00 PM, I was in the surgery room (looking nice and comfortable).

Photos and videos took place during the surgery.  That was kind of Dr. Bartolomé as per my request when I saw him on the first day.

Tools and Techniques During Surgery

Dr. Bartolomé said that during the surgery, the following will take place:

The doctor used the fluorescence-guided to be able to see clearly the high-grade (stage 2 and stage 4 areas) cells, in order to ensure to resection the right areas.   You can watch this video that another doctor shared how the high-grade is much easier to see during surgery.

I met all the doctors, and they explained to me the process.  They put me in a comfortable setting and put many devices in the back, on the head and other places.  After they made sure that I am in the comfortable set up and location, I was given something to sleep.  I started reading to 10.   Despite that I wanted to count to 20, I slept after counting 3 only 🙂

I was told that it will take an hour after my brain is clean and ready to be worked through.    They took it in 45 minutes (15 min less).  How come? well, the doctor said that obviously the surgery on 2009 was not closed properly.  Dr. Oliver said that they were surprised given it’s weak open outside.   Lucky me, I had no hits on the brain since then!

When they woke me up, I told them several times that I am sleepy and want to sleep (I don’t remember that).   The doctor was patient and gave me 15 minutes to wake up. 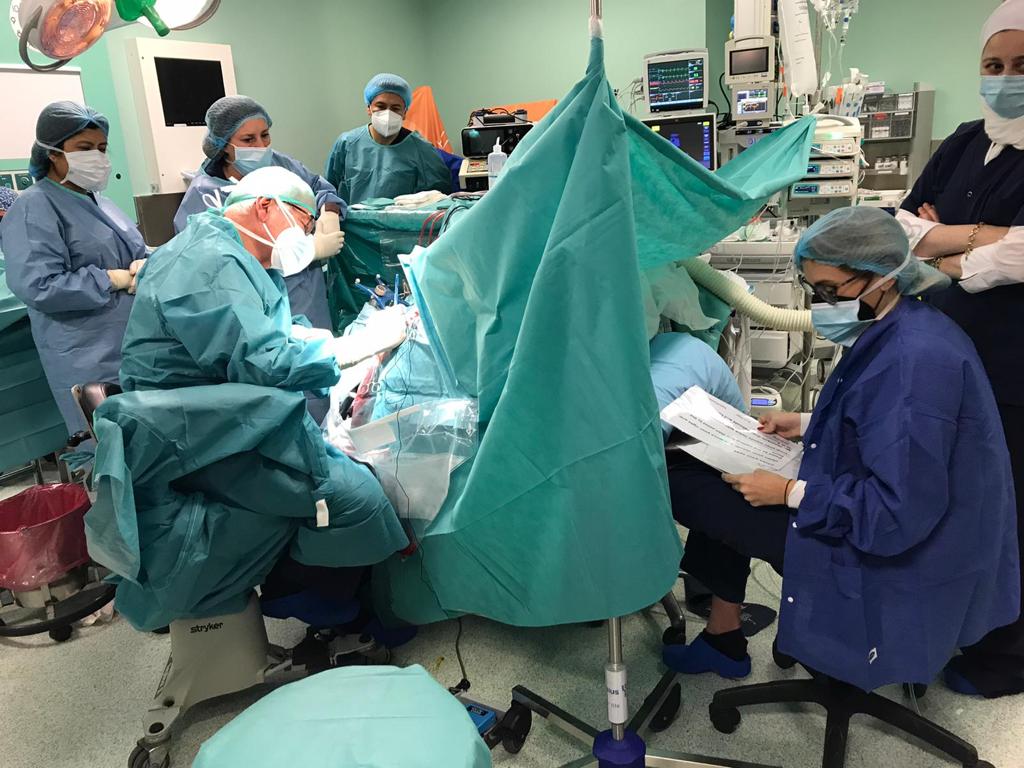 I do remember the first two minutes, where they started asking me the targeted questionnaires.   The Neuropsychologist did the dperative coagulation assessments in English, and had a colleague who did them in Arabic too.   The team told me that I actually did a better job than the time they did it an hour (before surgery).  That’s why the doctor decided to resect the area without waking me up again (it was planned to be done twice).

The photos below shows that during the resection, the doctor did not find any tumor in the colors that the GLIOLAN was to show.   The doctor did not share that fact with me post surgery, and wanted to see what’s the purpose that no Stage 3 nor Stage 4 tumor showed up.   He wanted to wait until the Pathology shows up. 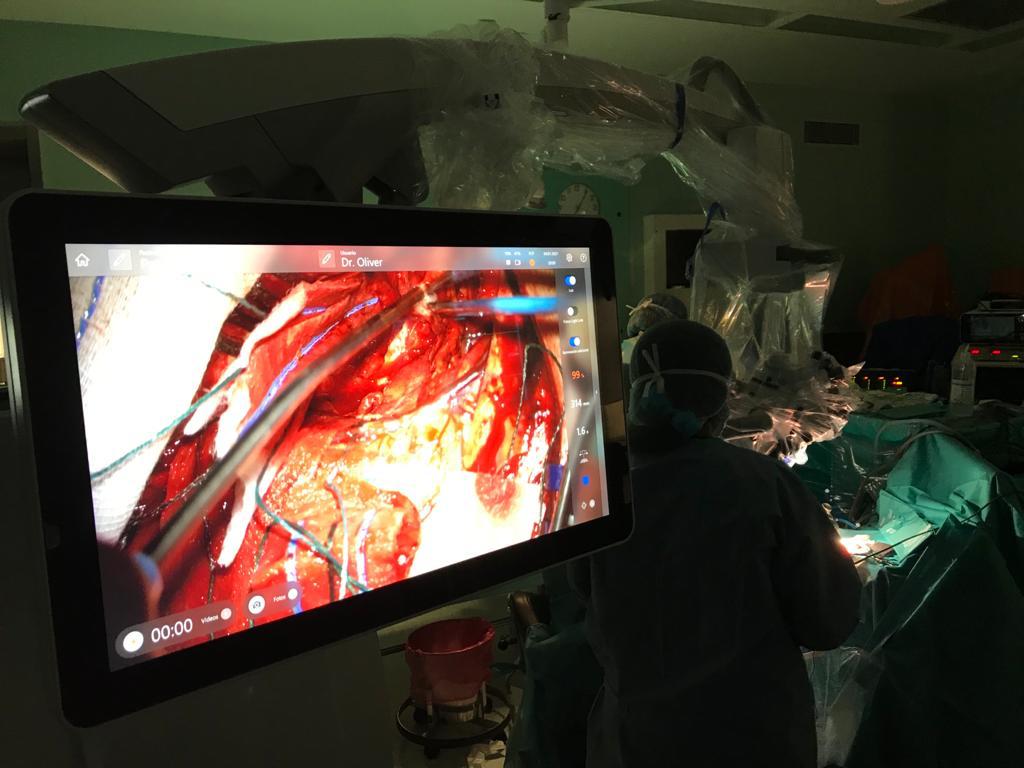 They videos shows parts of areas that they cut off, and these are 4 videos, where each of them are less than 5 minutes each.  You can see them here if you feel comfortable watching those videos.

I decided to put the images of the first brain tumor resection versus the newer one.

Clearly, the amount that was cut is significantly larger. 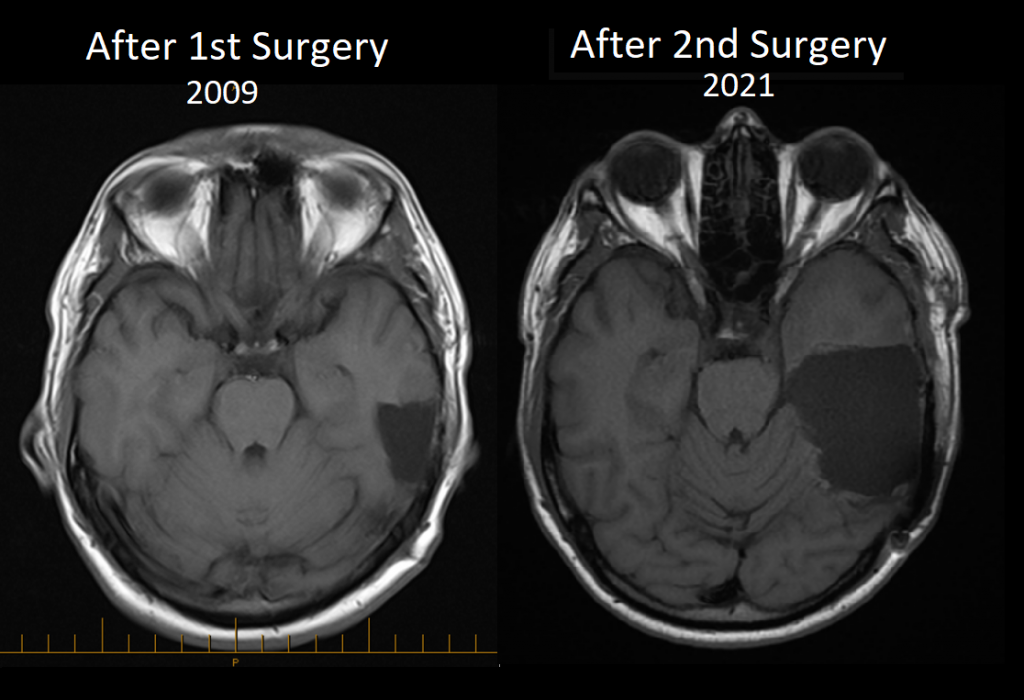 SCAN THIS QR CODE WITH YOUR PHONE

I am a patient, and an undergraduate student dedicated to making scientific information about diseases associated to me.
I emphasize that I am neither medical professionals, nor am I an affiliated with the researchers and laboratories mentioned referred to in my pages. The information I present is intended for educational purposes or to help my own case only and should not be construed as offering diagnoses, recommendations or treatments.

This website uses cookies to improve your experience while you navigate through the website. Out of these cookies, the cookies that are categorized as necessary are stored on your browser as they are essential for the working of basic functionalities of the website. We also use third-party cookies that help us analyze and understand how you use this website. These cookies will be stored in your browser only with your consent. You also have the option to opt-out of these cookies. But opting out of some of these cookies may have an effect on your browsing experience.
Necessary Always Enabled
Necessary cookies are absolutely essential for the website to function properly. This category only includes cookies that ensures basic functionalities and security features of the website. These cookies do not store any personal information.
Non-necessary
Any cookies that may not be particularly necessary for the website to function and is used specifically to collect user personal data via analytics, ads, other embedded contents are termed as non-necessary cookies. It is mandatory to procure user consent prior to running these cookies on your website.
SAVE & ACCEPT
Fatigue and Tiredness on Different Times

I wake up with good general power, then two hours down the road, I become fatigued (and hence I always work from home knowing it will be otherwise difficult).
That did not improve when I was on Ketogenic Diet (fasting in the morning), nor when I wasn’t on the Ketogenic diet.
Does eating make me improve? No. Supplements? No. Exercise? No
I then get better near 9 PM. I have the energy again, but no improvement in the mental capabilities.

Beginning in July 2019, I found that the seizures were significantly controlled/reduced by introducing CBD and few Supplements.

This is the Most Challenging/Critical

I have developed slower abilities to save new words or subjects, regardless of language. Noticeably, when I’m
reading the content within Information Technology (my original subjective), then I will be doing “okay”.
If the content is on a completely fresh subject, I would suffer from mental fatigue anywhere between 1 min to 15
min of reading.
It’ll shard to list the subject of a talk in sequence at the end of a meeting. However, if I’m giving time (minutes or
hours), I may remember a good portion of it on the same day. Next days, I cannot remember that unless I’m given
hints Self-distracting thoughts during conversations most of the time.
I struggle with spelling for words that I never had before in the past.
Tossing names in another challenge too. I also often find myself frustrated following my surgery when I mix up the
the spelling of words, such as “write” and “right”.

I have listed examples of my brain challenges. You can see them here.
For a list of select symptoms over the many years, I have compiled an overview of this information for quick
review.
A recent Cognition Assessment Test conducted on 7/2019 shows that there are major challenges requiring attention.
That probably shows the same outcome that I had when I conducted the Gibson Cognitive Skills Assessment back in
2013 which showed similar poor outcomes.